(Mahamandaleshwar Swami Suryananda Saraswati Yogacharya Amadio Bianchi Maharaj)
Is the Founder of the World Yoga and Ayurveda Community, President of the World Movement for Yoga and Ayurveda, of the European Yoga Federation, of the International School of Yoga and Ayurveda C.Y. Surya, Vice President of the International Yog Confederation of New Delhi, a Founding member of the European Ayurveda Association, Advisor of the United Consciousness Global, Member of Global Council of Hindu Leaders, National Coordinator for Italy of the Hindu Acarya Saba.
In January 2014 in Dubai for an important international conference, he was awarded the title of Ambassador of Yoga and Ayurveda.
He operated in Italy, India, Greece, France, Latvia, Lithuania, Slovenia, Spain, Switzerland, Croatia, Portugal, Argentina, Romania, Poland, Brazil, Bulgaria, Germany, U.S.A., Slovakia etc. He is often present in major congresses as a speaker. His numerous books dedicated to yoga and Ayurvedic disciplines are widespread and used in many schools and associations. 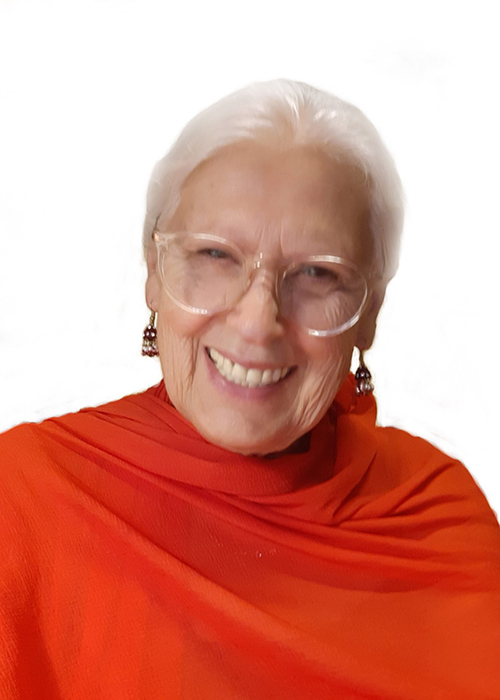 Emy Blesio, Mahamandaleshwar Pandit Yogacharini Swami Gayatri Devi, is a Yoga Paripurna schoolmaster and UPF Ambassador for Peace (recognized by the UN), received Honoris Causa doctorate by Techno India University (Kolkata-West Bengal – India), and Advisor of the same University. Her experience in Yoga discipline and Indian culture dated since 1965, even she already was very interested in the culture and philosophy of India. In 2010 she received the “F. Gandhi Peace Simplicity Award” at the Mahatma Gandhi Memorial in New Delhi, India. She is Patron of the “Women International Network Award”, Peace & non-violence. Member forever of the World Peace Development & Research Foundation. Noida UP, India.
In Italy she is Member of Città Mondo Association Board of Directors, Milan Department of Culture and Contact Person for the Rights and Equal Opportunities section. She founder and still is spiritual guide of Suryanagara-Ashram, Milan. President of The World Community of I. C. & T.D., of C.U.I.D.Y. Confederazione Ufficiale Italiana Di Yoga and the (I.Y.C) International Yog Confederation of Delhi (in association with the Ministry of DoNER of India). Co-Founder and Ambassador of the World Movement of Yoga and Ayurveda, and Patron of IECSME (which deals with emancipating the Indian small Villages). Following a personal and introspective Sanatana Dharma, she codifies a Yoga Paripurna, referred to the millenary tradition of this discipline, which in 2009, the Indian gurus, in Gondarmau (MP), said the native village of Maharishi Patanjali, they defined “Yoga complete, full, total”. From 1998 she runs some big events “Artists for Peace-Gandhi 50 years later” in 2002 “Il festival dell’India: l’Oriente incontra l’Occidente” which later becomes “MITICAINDIA” scheduled every year from 2002 until 2016 in Italy and after in Spain in 2017 and 2018. In meanwhile, (included in MITICAINDIA), the spiritual Symposium “Rays of One Unique Light”, that join the various spiritual lines. In Bhopal (MP) she organize with Indian public bodies, the MahaRishi PATANJALI WEEK CELEBRATION dedicated to the legendary Yogi of Yoga Sutras (born in Gondarmau, near Bhopal) and it go on every year since 2010. She published her Yoga experiences in 12 books.